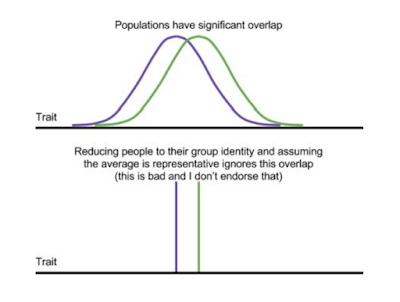 James Damore, Harvard PhD* in Systems Biology, and (until last week) an engineer at Google, was fired for writing this memo: Google’s Ideological Echo Chamber, which dares to display the figure above.

Here is Damore’s brief summary of his memo (which contains many citations to original scientific research), and the conclusion:

Google’s political bias has equated the freedom from offense with psychological safety, but shaming into silence is the antithesis of psychological safety.
● This silencing has created an ideological echo chamber where some ideas are too sacred to be honestly discussed.
● The lack of discussion fosters the most extreme and authoritarian elements of this ideology.
○ Extreme: all disparities in representation are due to oppression
○ Authoritarian: we should discriminate to correct for this oppression
● Differences in distributions of traits between men and women may in part explain why we don’t have 50% representation of women in tech and leadership.
● Discrimination to reach equal representation is unfair, divisive, and bad for business.

I hope it’s clear that I’m not saying that diversity is bad, that Google or society is 100% fair, that we shouldn’t try to correct for existing biases, or that minorities have the same experience of those in the majority. My larger point is that we have an intolerance for ideas and evidence that don’t fit a certain ideology. I’m also not saying that we should restrict people to certain gender roles; I’m advocating for quite the opposite: treat people as individuals, not as just another member of their group (tribalism).

This actual excerpt is of course very different from the heavily biased (mendacious) characterizations of the memo in the (lying) media. Perhaps that should make you wonder about the reliability of mainstream accounts concerning this matter.

This has been a very difficult time. I wanted to provide an update on the memo that was circulated over this past week.

First, let me say that we strongly support the right of Googlers to express themselves, and much of what was in that memo is fair to debate, regardless of whether a vast majority of Googlers disagree with it. However, portions of the memo violate our Code of Conduct and cross the line by advancing harmful gender stereotypes in our workplace. Our job is to build great products for users that make a difference in their lives. To suggest a group of our colleagues have traits that make them less biologically suited to that work is offensive and not OK. It is contrary to our basic values and our Code of Conduct, which expects “each Googler to do their utmost to create a workplace culture that is free of harassment, intimidation, bias and unlawful discrimination.”

The memo has clearly impacted our co-workers, some of whom are hurting and feel judged based on their gender. Our co-workers shouldn’t have to worry that each time they open their mouths to speak in a meeting, they have to prove that they are not like the memo states, being “agreeable” rather than “assertive,” showing a “lower stress tolerance,” or being “neurotic.”

At the same time, there are co-workers who are questioning whether they can safely express their views in the workplace (especially those with a minority viewpoint). They too feel under threat, and that is also not OK. People must feel free to express dissent. So to be clear again, many points raised in the memo—such as the portions criticizing Google’s trainings, questioning the role of ideology in the workplace, and debating whether programs for women and underserved groups are sufficiently open to all—are important topics. The author had a right to express their views on those topics—we encourage an environment in which people can do this and it remains our policy to not take action against anyone for prompting these discussions. …

Larry Summers was fired from the Harvard presidency (at least in part) for pointing out (correctly, it seems) that males exhibit higher variance in performance on cognitive tests (more very low- and high-scoring men than women per capita). His detractors justified the termination due to his highly public and symbolic role as the leader of the institution. In contrast, Damore was simply an engineer (with a background in computational biology) expressing his opinion on some basic scientific questions still under active investigation by researchers all over the world. His firing has to be regarded as scary authoritarian policing of thought.

If I worked at Google would this blog post get me fired?

* Damore may be ABD (left Harvard before completing his dissertation) rather than a PhD.

Damore is going to fight Google in court (NYTimes):

Mr. Damore, who worked on infrastructure for Google’s search product, said he believed that the company’s actions were illegal and that he would “likely be pursuing legal action.”

“I have a legal right to express my concerns about the terms and conditions of my working environment and to bring up potentially illegal behavior, which is what my document does,” Mr. Damore said.

Before being fired, Mr. Damore said, he had submitted a complaint to the National Labor Relations Board claiming that Google’s upper management was “misrepresenting and shaming me in order to silence my complaints.” He added that it was “illegal to retaliate” against an N.L.R.B. charge.

According to The Federalist, Damore has a case. This trial of the century might expose large numbers of people to the ideas in his memo…