Sometimes we forget … forget to take a break, forget to get outside, and forget to reflect on our individual and collective pasts.

After an intense three days of talks at EMBO—hearing about exciting work by diverse and superb biologists in 13-minute chunks (plus Q&A); seeing dear friends Santiago Elena, Sebastian Bonhoeffer, and Roy Kishony; and making new friends, too—I’ve got the weekend to work quietly and explore Heidelberg.

Yesterday I took the beautiful hike known as Philosophenweg, or the Philosophers’ Way. After crossing the river Neckar, a quick right on Ladenberger Strasse, then the walk up past the grand houses and physics buildings before the gardens that overlook the river, old city, and castle perched in the hills across the way. There were also intriguing and enticing paths into the woods above, but I didn’t take them yesterday.

I returned this morning, despite the chill and overcast sky. The Philosophers’ Way was as scenic as yesterday, but I hardly lingered and hustled up the path to do some exploring in the woods today, hopefully before the rain began.

Off the main path, it soon became very quiet and beautiful in a different way—no longer the dramatic views across the river, and instead the smells, sounds, and colors of autumn in a beautiful forest. The sights and sounds of leaves falling and crunching under foot, and the smells of leaves, branches, and trees returning to the soil.

The slopes and colors and smells reminded me—not exactly, but close enough—of days long past when I hiked and worked in the forests of the Nantahala mountains in North Carolina. I’d be willing to bet there are a lot of carabid beetles in the woods above the Philosophers’ Way. And they have been walking through these woods far longer than the philosophers.

As I walked up and up, there were lots of paths, and at many of the intersections old stones with names, all unfamiliar to me. In particular, this one—Thingstätte—caught my attention. It seemed kind of funny, but maybe in a dark way. I wondered what it meant, and so I took a picture to remind me to look it up when I returned to the city. 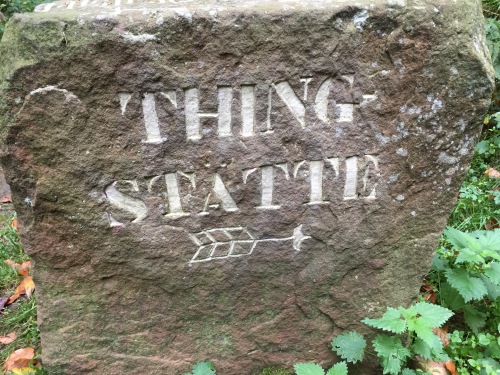 My mind also wandered to these woods, and to history. There weren’t any markers of battles or massacres, but what did happen here in the 1930s and 1940s? With friends and family about 20 years ago, I went on a peaceful walk in the lovely forests near Krakow, where we came upon markers for sites of executions during the Second World War. And the violence of man (and it’s almost always men) against humanity continues—from crazed gunmen shooting on happy crowds to suicide bombers, genocidal wars, and even the threat of nuclear war.

In The Better Angels of Our Nature, Steven Pinker tells us the world is becoming less violent. But Peter Turchin warns us that history is nonlinear—it can come in waves, sometimes constructive but other times violent and destructive. I sure hope Pinker is right.

About that Thingstätte above Philosophenweg. It’s a large amphitheater in the woods, built by and for the Nazis. It was opened in 1935 with a speech by Joseph Goebbels, who called it “National Socialism in stone.” I’m glad that I turned around before I got there …

Can we all turn around now? Let’s take The Philosophers’ Way back from the brink, and get on with studying the amazing world that we all share.

Dr. Lenski is an evolutionary biologist. He writes about evolutionary science – past, present, and future – and some of the goings-on in the life of a scientist.