Some gloomy remarks on the decline of the American Empire.

1. US foreign policy over the last decades has been disastrous — trillions of dollars and thousands of lives expended on Middle Eastern wars, culminating in utter defeat. This defeat is still not acknowledged among most of the media or what passes for intelligentsia in academia and policy circles, but defeat it is. Iran now exerts significant control over Iraq and a swath of land running from the Persian Gulf to the Mediterranean. None of the goals of our costly intervention have been achieved. We are exhausted morally, financially, and militarily, and still have not fully extricated ourselves from a useless morass. George W. Bush should go down in history as the worst US President of the modern era.

2. We are fortunate that the fracking revolution may lead to US independence from Middle Eastern energy. But policy elites have to fully recognize this possibility and pivot our strategy to reflect the decreased importance of the region. The fracking revolution is a consequence of basic research from decades ago (including investment from the Department of Energy) and the work of private sector innovators and risk-takers.

3. US budget deficits are a ticking time bomb, which cripple investment in basic infrastructure and also in research that creates strategically important new technologies like AI. US research spending has been roughly flat in inflation adjusted dollars over the last 20 years, declining as a fraction of GDP.

4. Divisive identity politics and demographic trends in the US will continue to undermine political cohesion and overall effectiveness of our institutions. (“Civilizational decline,” as one leading theoretical physicist observed to me recently, remarking on our current inability to take on big science projects.)

5. The Chinese have almost entirely closed the technology gap with the West, and dominate important areas of manufacturing. It seems very likely that their economy will eventually become significantly larger than the US economy. This is the world that strategists have to prepare for. Wars involving religious fanatics in unimportant regions of the world should not distract us from a possible future conflict with a peer competitor that threatens to match or exceed our economic, technological, and even military capability.

However, I’m not sure that OBOR (One Belt One Road) and a focus on the “world island” of Eurasia will be a winning strategy for China. Mackinder’s dream of a unified or even fully economically integrated world island will have to overcome the limitations (in human capital, institutions, culture, etc.) of the under-developed middle… 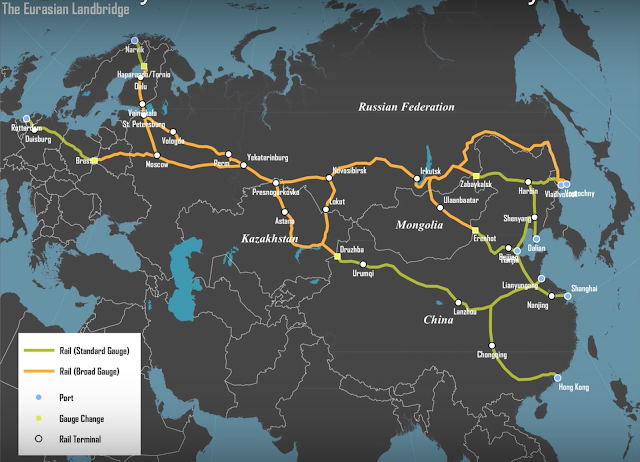 More McCoy and Mackinder. RAND study on war with China mentioned by McCoy in the video above is linked here.

See also The Stages of Empire:

The empires Glubb studied had a lifespan of about ten human generations, or two hundred and fifty years, despite changing factors such as technology. Glubb describes a pattern of growth and decline, with six stages: the Ages of Pioneers, Conquest, Commerce, Affluence, Intellect and Decadence. He pointedly avoided writing about India or China, focusing rather on middle and western Eurasia, stating that his knowledge was inadequate to the task.

Note that six stages in 10 generations means that significant change can occur over one or two generations — a nation can pass from one age to the next, as I believe we have in America during my lifetime.

… There does not appear to be any doubt that money is the agent which causes the decline of this strong, brave and self-conﬁdent people. The decline in courage, enterprise and a sense of duty is, however, gradual. The first direction in which wealth injures the nation is a moral one. Money replaces honour and adventure as the objective of the best young men. Moreover, men do not normally seek to make money for their country or their community, but for themselves. Gradually, and almost imperceptibly, the Age of Affluence silences the voice of duty. The object of the young and the ambitious is no longer fame, honour or service, but cash. Education undergoes the same gradual transformation. No longer do schools aim at producing brave patriots ready to serve their country. [ Or to discover great things for all mankind! ] Parents and students alike seek the educational qualifications which will command the highest salaries. …

The unbelievers will say they are but words, but a slogan, but a flamboyant phrase. Every pedant, every demagogue, every cynic, every hypocrite, every troublemaker, and I am sorry to say, some others of an entirely different character, will try to downgrade them even to the extent of mockery and ridicule.

The 21st century American reality (the Age of Decadence):

“Yeah, I calculated the NPV, and, you know, it’s just not worth it for me. I really believe in your project, though. And, I share your passion. Good luck.”