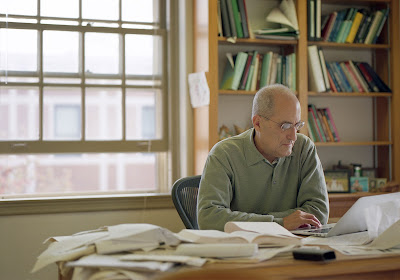 Today I came across a recent interview with Ed Witten in Quanta Magazine. The article has some nice photos like the one above. I was struck by the following quote from Witten (“It from Qubit!”):

When I was a beginning grad student, they had a series of lectures by faculty members to the new students about theoretical research, and one of the people who gave such a lecture was Wheeler. He drew a picture on the blackboard of the universe visualized as an eye looking at itself. I had no idea what he was talking about. It’s obvious to me in hindsight that he was explaining what it meant to talk about quantum mechanics when the observer is part of the quantum system. I imagine there is something we don’t understand about that.  [ Italics mine ]

The picture he refers to is reproduced below. 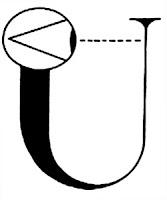 This question has been of interest to me since I was first exposed to quantum mechanics, although I put it off for a long time because quantum foundations is not considered a respectable area by most physicists! Of course it should be obvious that if quantum mechanics is to be a universal theory of nature, then observers like ourselves can’t help but be part of the (big) quantum system.

Here’s a similar figure, meant to represent the perspective of an observer inside the wavefunction of the universe (which evolves deterministically and unitarily; the degrees of freedom of the observer’s mind are part of the Hilbert space of Psi; time runs vertically and Psi evolves into exp(-iHT) Psi while we are “inside” :-). The figure was drawn on the whiteboard of my University of Oregon office and persisted there for a year or more. I doubt any visitors (other than perhaps one special grad student) understood what it was about. 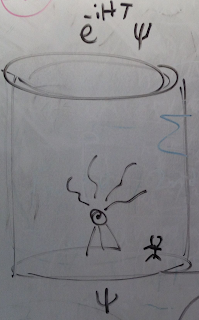 For some powerful Witten anecdotes like the one below, see here. (If you don’t know who Ed Witten is this should clarify things a bit!)

I met him in Boston in 1977, when I was getting interested in the connection between physics and mathematics. I attended a meeting, and there was this young chap with the older guys. We started talking, and after a few minutes I realized that the younger guy was much smarter than the old guys. He understood all the mathematics I was talking about, so I started paying attention to him. That was Witten. And I’ve kept in touch with him ever since.

In 2001, he invited me to Caltech, where he was a visiting professor. I felt like a graduate student again. Every morning I would walk into the department, I’d go to see Witten, and we’d talk for an hour or so. He’d give me my homework. I’d go away and spend the next 23 hours trying to catch up. Meanwhile, he’d go off and do half a dozen other things. We had a very intense collaboration. It was an incredible experience because it was like working with a brilliant supervisor. I mean, he knew all the answers before I got them. If we ever argued, he was right and I was wrong. It was embarrassing!

(Fields Medalist Michael Atiyah, on what it was like to collaborate with Witten)

The closest thing I have read to a personal intellectual history of Witten is his essay Adventures in Physics and Math, which I highly recommend. The essay addresses some common questions, such as What was Ed like as a kid? How did he choose a career in Physics? How does he know so much Mathematics? For example,

At about age 11, I was presented with some relatively advanced math books. My father is a theoretical physicist and he introduced me to calculus. For a while, math was my passion. My parents, however, were reluctant to push me too far, too fast with math (as they saw it) and so it was a long time after that before I was exposed to any math that was really more advanced than basic calculus. I am not sure in hindsight whether their attitude was best or not.

A great video, suggested by a commenter: