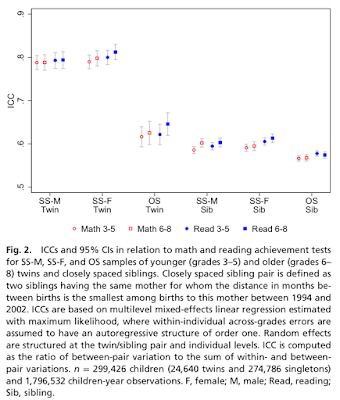 These researchers, from Stanford, Northwestern, and the University of Florida, analyze a large population of twins and siblings (~24k twins and ~300k children in total, born 1994-2002 in Florida). They find no evidence of SES (Socio-Economic Status) moderation of genetic influence on test scores (i.e., cognitive ability). The figure above shows the usual pattern of lower pairwise correlations in test performance between non-identical twins and ordinary sibs, consistent with strong heritability. (In figure, ICC = Intraclass Correlation = ratio of between-pair variance to total variance; SS/OS = Same/Opposite Sex.) The researchers find, via further analysis (see below), that lower SES does not decrease heritability. No large GxE effect at low SES.

Earlier work by Turkheimer and collaborators (with much smaller sample size) suggested that low SES can drastically reduce the genetic heritability of intelligence. Their result has been widely publicized, but over time evidence is accumulating against it.

Note that Economics Nobelist James J. Heckman is the editor at PNAS who handled this paper. Heckman is an expert statistician and one of the most highly cited researchers in the area of childhood education and human capital. He was also a vocal critic of The Bell Curve, but seems (now) to accept the validity of general intelligence as a construct, its heritability, and the difficulty of increasing intelligence through environmental intervention. He tends to focus on other, more trainable, factors that influence life success, such as (my interpretation) Conscientiousness, Rule Following, Pro-Sociality, etc. (“non-cognitive skills”).

Significance
A prominent hypothesis in the study of intelligence is that genetic influences on cognitive abilities are larger for children raised in more advantaged environments. Evidence to date has been mixed, with some indication that the hypothesized pattern may hold in the United States but not elsewhere. We conducted the largest study to date using matched birth and school administrative records from the socioeconomically diverse state of Florida, and we did not find evidence for the hypothesis.

Abstract
Accurate understanding of environmental moderation of genetic influences is vital to advancing the science of cognitive development as well as for designing interventions. One widely reported idea is increasing genetic influence on cognition for children raised in higher socioeconomic status (SES) families, including recent proposals that the pattern is a particularly US phenomenon. We used matched birth and school records from Florida siblings and twins born in 1994–2002 to provide the largest, most population-diverse consideration of this hypothesis to date. We found no evidence of SES moderation of genetic influence on test scores, suggesting that articulating gene-environment interactions for cognition is more complex and elusive than previously supposed.

First, Turkheimer and Horn indicate that “the between-pair variance of MZ pairs decreases in poor environments” (ref. 21, p. 63). Contrary to this relationship, we found that the between-pair variance of SS twins is actually lowest in the highest SES families. Given that SS twins are a relatively equal combination of MZ and DZ twins, one possibility is that a pattern supporting the hypothesis among MZ SS twins is masked by an even stronger pattern in the opposite direction among DZ SS twins. However, Fig. 3 shows that corresponding results for OS twins (all of whom are DZ) give no indication of such a pattern. Between-pair variances in achievement test scores for high-school educated parents of OS twins are higher in all cases than it is for parents without a high school diploma.

Second, Turkheimer and Horn report that “the within-pair variance of MZ twin pairs increases at lower levels of SES: poverty appears to have the effect of making MZ twins more different from each other” (ref. 21, p. 61). We would therefore expect in our data that the within-pair variance for SS twins whose mother did not graduate from high school would be higher than the variance for SS twins whose mother has a high school diploma. However, this is not the case in any of the SS twin comparisons shown in Fig. 3.

Via SSC — thanks, Scott!

Added remarks about context and broader implications: This paper does not exclude SES effects on intelligence. Rather, it excludes a hypothesis (big nonlinear effect at low SES; GxE!) that has been widely discussed: In good environments individuals can achieve their full genetic potential, and consequently measured heritability is high. However, in bad environmentsindividuals don’t achieve their full genetic potential, and (perhaps) do not even realize the full effect of beneficial genetic variants, so heritability is much reduced. This reasonable sounding hypothesis is not supported by the Florida data, suggesting that genetic influence is similarly strong in both high and low SES families.

Now, just how strong is this genetic influence? Many large studies have been conducted on populations of twins (raised together and apart), adoptees (who end up resembling their biological parents much more than the adoptive parents who raised them), and ordinary siblings. The results suggest very high heritability of adult intelligence — broad sense heritability may be as high as ~0.8!

Wikipedia: Recent twin and adoption studies suggest that while the effect of the shared family environment is substantial in early childhood, it becomes quite small by late adolescence. These findings suggest that differences in the life styles of families whatever their importance may be for many aspects of children’s lives make little long-term difference for the skills measured by intelligence tests.