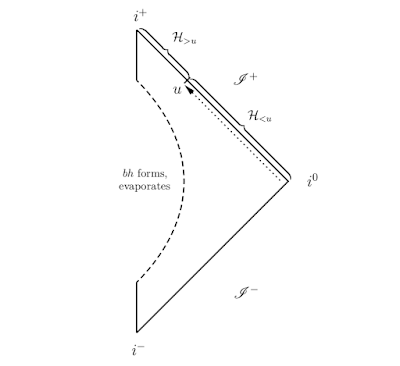 When I was at Caltech a few weeks ago I had a chance to discuss the recent paper below by Sean Carroll and collaborators. (Authors are at Caltech, Berkeley, and UBC.)

Abstract: We discuss the branching structure of the quantum-gravitational wave function that describes the evaporation of a black hole. A global wave function which initially describes a classical Schwarzschild geometry is continually decohered into distinct semiclassical branches by the emission of Hawking radiation. The laws of quantum mechanics dictate that the wave function evolves unitarily, but this unitary evolution is only manifest when considering the global description of the wave function: it is not implemented by time evolution on a single semiclassical branch. Conversely, geometric notions like the position or smoothness of a horizon only make sense on the level of individual branches. We consider the implications of this picture for probes of black holes by classical observers in definite geometries, like those involved in the AMPS construction. We argue that individual branches can describe semiclassical geometries free of firewalls, even as the global wave function evolves unitarily. We show that the pointer states of infalling detectors that are robust under Hamiltonian evolution are distinct from, and incompatible with, those of exterior detectors stationary with respect to the black hole horizon, in the sense that the pointer bases are related to each other via nontrivial transformations that mix system, apparatus, and environment. This result describes a Hilbert-space version of black hole complementarity.

At question is a possible loophole in the AMPS argument that black hole (BH) firewalls are a necessary consequence of the assumption of unitary evolution (i.e., that the quantum information associated with things that fall into the hole eventually re-emerges in the Hawking radiation).

I pointed out that as a BH evaporates, fluctuations in the specific pattern of Hawking radiation lead to macroscopically different trajectories of the BH itself. The BH wave function is therefore a superposition of many branches which describe different spacetime geometries. The firewall construction, and many of the older arguments indicating a BH information paradox, assume a fixed semiclassical geometry. I noted that unitarity might be violated on each decoherent branch of the BH wave function, but restored when all the superpositions are added together.

Most of my discussions with AMPS, and their criticism of my papers, focused on counting the number of decoherent branches. They claimed it was obvious that there were not enough decoherent branches to restore unitarity, whereas I claimed that it was obvious that the number of decoherent branches was of the same order as the total number of Hawking radiation states. To construct the BH information paradox one has to assume a universe much larger than the BH, with many more degrees of freedom, so that each Hawking quantum that leaves the BH is decohered via interactions with the environment before reaching future infinity. Thus (I argued***) there are enough branches to (in principle) unitarize the separately non-unitary processes on each branch. Whether and how this actually occurs is still an open question! But it seems possible to me that the complex superposition structure of the “wave function of the universe” containing a BH plays a role in the information paradox.

Sean and his co-authors emphasize that AMPS have the burden of proof to show that summing over branches cannot unitarize the BH amplitude.

For more, see these posts:

*** The difficult question is whether one should run the AMPS construction over a description that is coarse grained over many decoherent branches, thereby reducing significantly the effective total number.